We arrived home from Halfway Lake on Saturday evening the 16th July and yesterday was unpacking, sorting and laundry day. It was a most successful trip and left us wanting to go back. The scenery, peace, quiet and stressfree environment is really very good for the soul. Halfway Lake is situated in the Southern Boreal forest. The air is clear and the lakes are pristine and beautiful. We saw stars at night that we never saw in the Northern sky before. It was amazing. 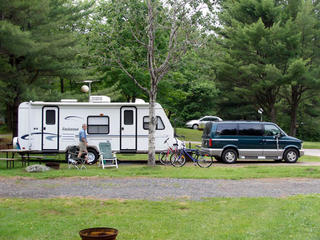 Our trip began on the 5th after we dropped Dad off at the airport for his flight to Maryland to stay with my sister for 3 weeks. Then we headed home, hitched up the trailer and set off, stopping overnight at Parry Sound KOA on the way up. It is one of the nicer KOAs that I have seen. Treed and nice trails. It is right on the Trans Canada Trail, so there were many people with their ATVs there. Then in the morning we set off for Halfway Lake, about an hour north of Sudbury on highway 144. 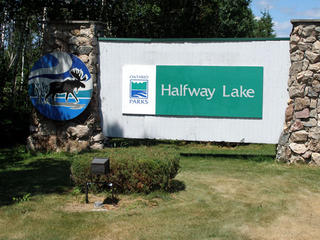 Our site was site #69 and was situated on the banks of Raven Lake. With the extremely high temperatures that we had for the 10 days that we were there, we really appreciated the breeze that kept our camping area very comfortable. Some people in the lower sites were so hot that they could not spend much time on their sites during the day. 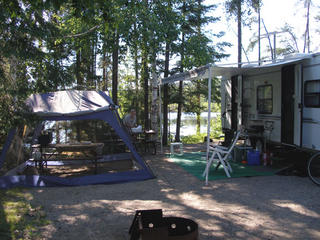 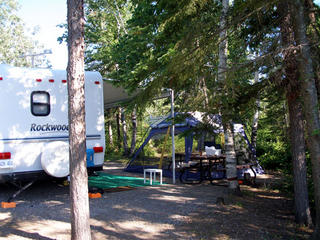 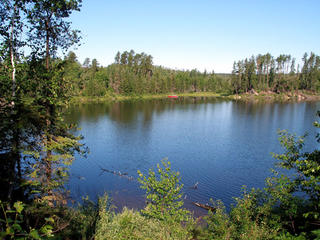 Raven Lake from our camp site

The 10 days up there were wonderful. We had hot, sunny weather for the entire time except for a very short rain shower on Wednesday afternoon. The temperature ranged from 31C (88F) to 37C (97F) for the entire time we were there. The humidex was also very high, usually up in the 40s (about 107F). For some of the time we were there some of the trails were closed because of the risk of forest fires and there were no fires allowed, even on the camp sites. 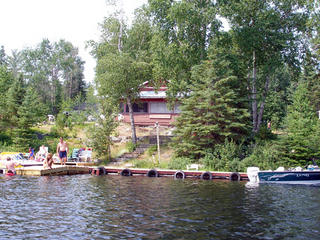 We rented a canoe for 5 days from Northwoods Lodge and spent most of those days canoeing on Halfway Lake or relaxing on beaches and rocks that are found around the lake. 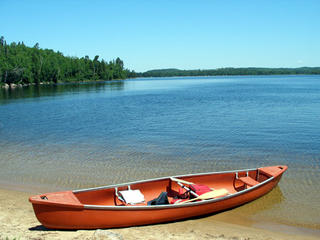 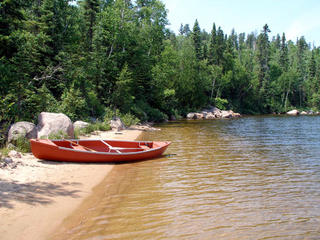 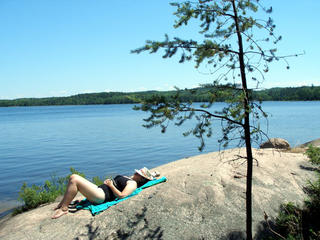 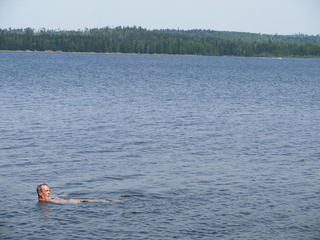 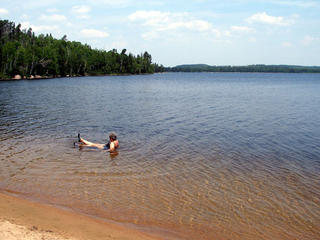 One day while we were picnicing at a rock on the far side of the beach, we were intrigued with the tiny, slender, iridescent blue dragon flies that accumulated on the reeds in the water. Here is a picture of two of them. 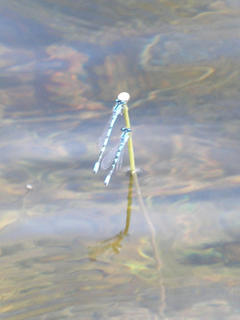 Halfway Lake has a long sandy beach which is wonderful for swimming and cooling down. On several days it was so hot that we actually put our chairs right into the water and propped the beach umbrella up and sat there reading, relaxing and keeping cool. 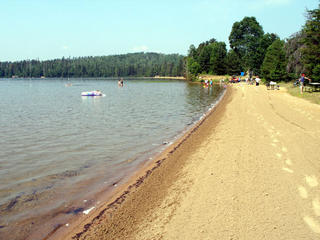 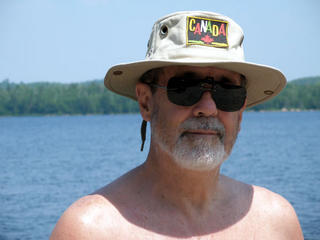 Michael keeps cool under his "Tilley" hat
We did a couple of the hikes while the fire ban was off. The first one was to a view site overlooking Raven Lake. That was about 6 kms up, down, over rocks and through forested areas. There were plenty of bugs, but with the help of Deep Wood "Off" we managed to keep them at bay. At the top of the one rise we found a large clear, rocky area where there were absolutely millions of blueberries growing. Of course we gorged ourselves, but not having anything to carry them back with us, were unable to take any back to the camp site. 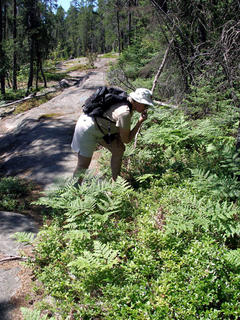 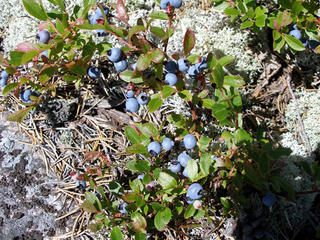 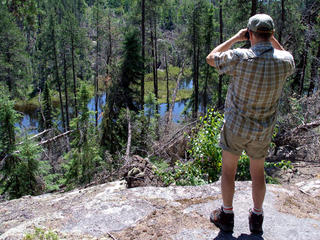 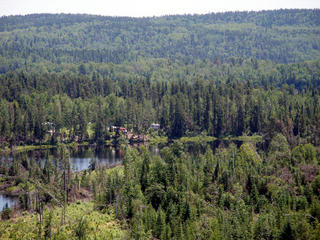 The view from the viewing deck on the trail. Our trailer is the white one in the middle of the picture. Raven Lake is in the foreground.

The second hike that we went on was the "Osprey Heights" trail which is about 7 kms long and goes to a view site over Antrim Lake. Again it is up and down over two or three ridges. It was quite tough, but we took it slow and did the whole circle. The views over Antrim Lake were stunning. Here are some photos from that hike. 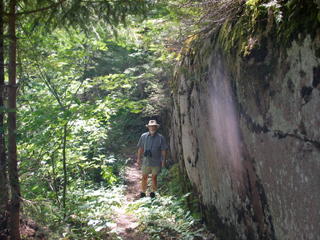 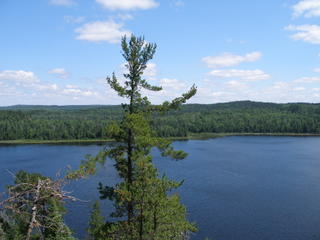 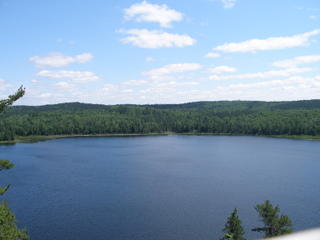 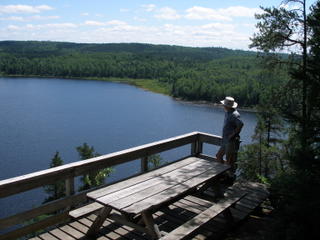 One evening we took a ride to the garbage dump at Cartier and watched the black bears as they came out of the forest. One even investigated our car by climbing up on the back bumper to check for juicy morsels. I was quite nervous. 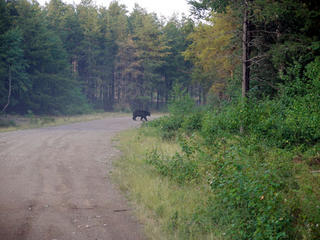 Papa bear ambling across the road. 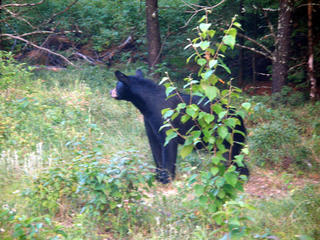 OBJECTS IN MIRROR ARE CLOSER THAN THEY APPEAR 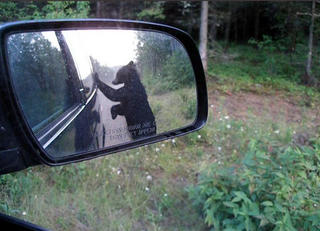 Mama Bear got very curious and gave our car a close up sniff! 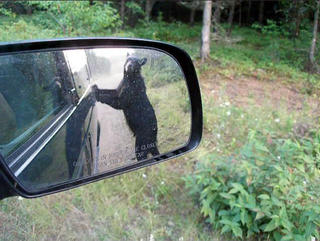 One morning we were eating breakfast in our dining shelter and Michael remarked that he felt as if he was in a Disney movie. There were squirrels and chipmunks running around, birds in the trees and then a rabbit jumped out of the undergrowth and tried to join us in the shelter. All we needed was for Bambi to emerge from the trees and the picture would have been complete! 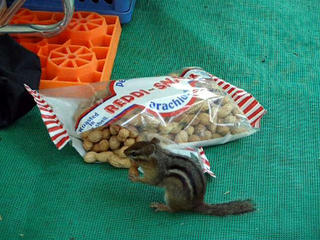 Mr Chippy helps himself to peanuts. 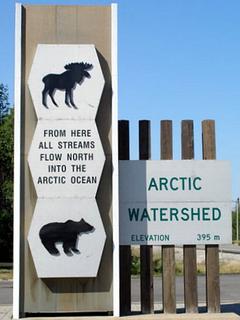 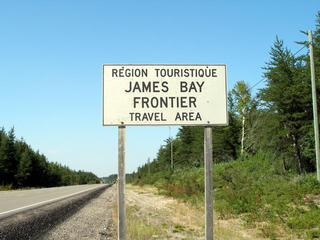 On our last day we decided that we had had enough sun, so we took a drive up to Timmins. We crossed into the Arctic Watershed and into the James Bay tourist region. This was a real thrill for me as I felt as if we were almost at the North Pole!
Posted by GoneRving at 5:36 AM