The campground is FULL!

This morning we woke to the sound of thunder. The rain came and it teemed straight down for about 10 minutes, then cleared up. Apart from a few more light showers, it has now cleared up completely. My thoughts went to all those tent campers in the field. As the sun started coming out, I picked up the camera and took a stroll outside and photographed the tenting area and the "transient" RV area. 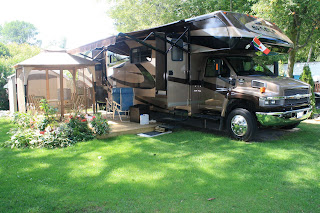 This weekend is the Civic Holiday weekend in Ontario. We are expecting the campground to fill up completely and already the tenting area is full. So we will just hunker down and spend the weekend quietly up on our street. My flowers are looking wonderful and my tomatoes and peppers are growing so fast. Here are some pictures taken today.

Posted by GoneRving at 7:48 PM No comments:

Back home at Cedar Beach.

On our way home from Galvin Bay, we stopped off at Bell's Truck and Towing and got the tire valve sorted out. It took only about 1/2 an hour. The bill was $100, which was all labour as no new parts were needed. The trip home was completely uneventful.

We are now settled back at Cedar Beach. Getting back into our site was really easy and we only had to ask one person to move their car. We even got a rousing welcome from our Russian neighbour who was not talking to us in the last 3 weeks.

Nice to have decent internet again. I am going to spend some time on this blog, catching up with photos and working out a routine to post a little bit every day.

Posted by GoneRving at 7:07 PM No comments:

Back last year sometime, we bought tire pressure monitors for the Moho and the car, 10 in all. We just never got round to installing them until yesterday. Once Michael had finished the set up it was showing the driver's side inside rear tire was sitting at only 20 psi instead of 90 psi. He took the monitor off and then used a gauge which confirmed the reading. Over the course of the evening, the tire pressure gradually got lower and lower until there was no pressure reading at all. He was very worried and we discussed various options for getting the tire repaired. We asked the campground owner to come over with his big compressor to try and pump the tire up so that we could see how fast it was deflating. He is unable to come until tomorrow. So we borrowed another camper's small compressor but that did not work. Overnight the pressure dropped to zero.

This morning Sylvain (the owner)tried to put air in but was unable to. We went online to find out if there was a truck or tire repair facility in the area. Our camping neighbors also told us about a place just down the road who may be able to help, Bell's Truck and Towing. I had found our tire warranty and they will cover repair or replacement 100% , which is reassuring. We jumped into the car and drove down to the truck place and they sent someone immediately in a big tow truck, with a big compressor on it. The mechanic was unable to get any air into the tire and so he tried to get air out, again was not able to do that. His diagnosis was that the tire was full of air, probably over full at this point and that the valve stem was faulty. We can wait until tomorrow and stop in on our way down Buckhorn Road to get the valve stem repaired and the tire repumped up. Whew! It's funny how you think what is a disaster, turns to be (almost) nothing. Our imaginations run away with us!

Now to sit back and enjoy the rest of the day.
Posted by GoneRving at 8:19 AM No comments:

Late Sunday afternoon, I stood up from the dinette and twisted my right knee. Have no idea what I did, but I could not stand on that leg. The pain was excruciating. Either I have torn another cartilage or pulled a tendon. R.I.C.E treatment along with analgesics and an uncomfortable night in bed. It was marginally better on Monday and I continued with the treatment. The emphasis being on REST. Today my knee is much better. I am going to have to see my knee doc as this is the knee I had arthroscopy on a few years back. I see a knee replacement in my future.

Today is a damp rainy day and we did not venture out too far. It is interesting watching the big rigs move out, to be replaced a couple hours later by more big rigs. What I have learned is the most of these full timers are members with various camping membership groups. Resorts Of Distinction, Adventure Outdoor Resorts, Coast to Coast, Western Horizons etc. Different memberships have different rules as to how long you can stay at one place and how much you pay. In Coast to Coast we paid $499 and we have an annual renewal rate for $89. We can stay at their resorts for 1 to 2 weeks at a time. There are not a lot of resorts in Ontario, but there are lots in the US. we received free RPI membership which includes Thousand Trails. Affiliated membership resorts are Good Neighbor, Western Horizons among others that I cannot remember at the moment. I will fill them in later!

In all this coming and going of full timers rigs, people get to meet other campers and somewhere along the line, they will meet up again at other resorts. They do a circuit, moving from resort to resort to comply with time in and out rules. Inevitably you get to meet the same people at different places. A community on wheels. Most of the rigs are fifth wheels as they are the most spacious. I prefer the motorhome pulling an economical car behind. I cannot imagine sight seeing in a honking great gas guzzling truck, even if I have to have a little less room in my home. I have no desire for a fifth wheel.

By evening today, my knee is a whole lot better and I can actually walk around a bit. Popped over to George and Sue to ask more questions re Internet access and satellite etc. They have been on the road for 5 years, so they have a lot of information to offer.
Posted by GoneRving at 5:02 PM No comments:

I can't believe it is so long since I last posted! Either we have been too busy or having too much fun! Now let me see, what has been happening simce I last posted??? I am going to try and post more often. I met someone today, where we are camped at the moment (Galvin Bay, Buckhorn) who has given me fresh enthusiasm! Thanks, George!

We got back to Ontario at the beginning of April. We had flown from California to Dulles and my sister met us at the airport and drove us back to her house in Keedysville, Maryland. We stayed a couple of days there and then drove "home" to Ajax. The motorhome was in storage in Moodie's Motor Inn. It was so good to be back in our home on wheels! Surprisingly, she started up first try and we moved to a spot at the back of the storage area where there is a power outlet, water and a sewer. Being so early in the season, the water was not turned on yet, but Michael managed to get some water and filled the tanks. Cedar Beach was not open yet, so we had to stay in Moodies for almost 2 weeks. I object to paying for camping when we have a seasonal site up in Stouffville! We took a couple of trips up to Cedar Beach and realized that we would not get the Seneca into the site we had booked last October, so we had to find another site. There were not many available, but we did find one which had no tree in front and had an open view to the South West sky for the satellite.

We moved happily onto our site on April 13th and started getting settled in. Luckily we were able to sell the shed that we built on our site across the road, to the family who took over that site. We found a better shed at Rona and spent a weekend putting that up. The next thing we built was a deck. The deck is just 7 4X8 modules, pushed together. We put a gazebo onto the deck, put in some plants and flower boxes and we are set. We have met some really nice people who live on our "street". I will post photos as soon as I have access to the Internet on my MacBook. I am making this blog entry on my iPad. I should look into getting the photo connector for the iPad.

The July long weekend we camped with friends at Saugeen Springs RV Resort near Hanover, where we camped for 3 days (at an exorbitant $50 a night), but we did have fun tubing down the Saugeen River. After the weekend we proceeded on to a Coast to Coast resort called Lake Huron RV Resort, just north of Goderich. We really enjoyed those 5 days. The resort is on the West coast of Ontario. Views of Lake Huron are expansive and the sunsets are staggeringly beautiful. We took the time to do some exploring in the Saturn. The other campers in the park were very friendly. We are booked to return toward the end of August.

I have half heartedly being looking for a casual job in an Obstetrics unit somewhere, but as there are so many cutbacks in the health care industry I doubt that I will find anything. No-one is hiring. Just thought that I could supplement our pensions for some extra stuff for the Motorhome, like solar panels etc.
Posted by GoneRving at 4:17 PM 1 comment:

We camped at Lake Huron resort from July 3rd to 8th. It is a Coast to Coast resort and so cost us only $10 a night. The resort is very nice and very clean. The views over Lake Huron are second to none and the sunsets are spectacular. The only problem is that you have to walk down a very steep pathway to get to the "natural" beach. Of course that means that you have to slog up the hill coming back. Nevertheless, we liked it and will be going back toward the end of August. We met some lovely people there and spent some very pleasant evenings sitting around a campfire getting to know them.


Posted by GoneRving at 6:54 PM No comments: