We are in Cambridge, staying with friends Thea and Bobby Kruger. We are preparing for the 4 days in Long Beach Conservation Area on the north shore of Lake Erie and the long trip to Manitoba and then California.

Today, Michael was rotating the tires on the car and he had done the one side, then went to the other side. He put the jack in where he thought it had to go and had the car jacked up. Thea and I were sitting inside and saw the car fall. We ran outside to see what happened and Michael was just looking at the car and he thought the brand new jack had failed. Now both wheel hubs on the driver's side, were on the driveway. He didn't know how he was going to get the car jacked up again because there was nowhere to insert the jack under the car. He then opened the car door and, guess what, the jack had not failed, it had just gone right through the floor of the car on the driver's side and there was the jack poking up through the floor of the car. Poor old thing was just white and in shock. Bobby Kruger was still at work.

Anyway, Bob got home from work (he works at Magna), took one look and got stuck in. They got the car jacked up, got the jack out from under and in the front. Thea and I went to Canadian Tire and bought some stuff that he had told us to get. He beat down the broken sheet metal inside of the car, he riveted steel plates over the hole and then covered the whole repair with the bitumen stuff that we bought. We just need to check the wheel alignment is OK. So it is a disaster averted.

This evening I drove Gus Kruger to the local ice-cream shop and everything seems fine.  Whew!!

Tomorrow we set off for Long Beach at about 11:00 am.
Posted by GoneRving at 5:34 PM No comments:

We had a great weekend with our daughter Suzanne, and her 2 little boys, Noah and Owen. Our son-in-law is working over in Seoul, South Korea so we took the opportunity of getting her over to Cedar Beach for a few days. It was tight in the Motor home but we managed. Suzanne slept in the bedroom with the 2 babies in bed with her, Michael on the overhead cab and me on the sofa bed. We had a ball even though it rained hard on Wednesday night and the kids were disturbed by the sound of the rain on the roof. It is very loud! Noah enjoyed the pool, splash pad and the beach. We couldn't really swim in the lake, because of high bacteria levels in the water after all the rain. We did have some great times in the pool. Noah is quite afraid of the water and doesn't like getting his face wet. I did get him in with a tube around his waist and he even let go of my hands a few times. Great progress!

It was sad to have to take them home this evening.

Photos coming!
Posted by GoneRving at 6:08 PM No comments:

We are getting itchy wheels!

Just over 1 week to go before we move from here. We are anxious to get going. First stop will be at a friend's house for the bike rack to be fitted to the front of the Regal, then we head over to Long Beach Conservation area to dry camp for the 4 days of the Potjiekos Competition. This is a South African gathering where over 60 people will be coming together. The highlight is the competition which is the cooking of several meals in 3 legged pot belly cast iron pots. It's a crazy weekend with a bunch of crazy South Africans. Fun, Fun, Fun!!!!
Posted by GoneRving at 5:52 PM No comments:

Michael went to work today and earned enough money to pay the health insurance for 2 months. He left at about 1/4 to 7. I was up at 7:30 so took the opportunity to go for an early shower and then I grabbed the camera and took photos of the playground and pool areas. It really is a nice park. We are on the family side, across the road from the main park.

The photos I took are posted on my Facebook page.

I had quite a lazy day and realized this afternoon that I had not worn my watch in 2 days and hadn't even missed it!!

The weather has been absolutely amazing. We have only had 1 rainfall since we have been here.

Tomorrow the battle of the earwigs begins. I am going to try and get some boric acid and sprinkle it around the MH. They are everywhere and I even find one floating in my coffee this morning. I think it must be because of the dry weather. They are trying find moisture.

Tomorrow is my day for going to the nurse practitioner for my annual check up and then to the storage locker to do some more sorting.  I am getting to the stage where I am being less and less emotional about my possessions. I am beginning to see them as a big burden.

Posted by GoneRving at 5:11 PM No comments:

We had a nice slow paced day today. A bike ride around the lake and a swim in the pool and some relaxing. The weekdays here are so nice quiet. At the weekend, everyone comes up from Friday to Sunday and the place is packed!

We are gradually getting things sorted out in the MH and a huge bag of junk went into the garbage. We have so many duplicates and so now we have tossed out the oldest and kept the best. Things that can do double or triple duty are being kept. I find that I have to put the emotion aside and think of the practicality of each object.

We have a huge issue with earwigs. They seem to be gathering in all the moist dark corners. I have read on the internet that Borax will get rid of them. I will be getting a box the next time I go shopping. I have yet to find out if they can do any damage.
Posted by GoneRving at 3:13 PM No comments: 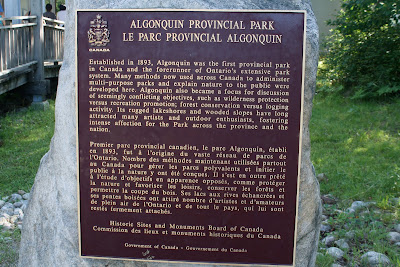 Plaque with a brief history of Algonquin Park. 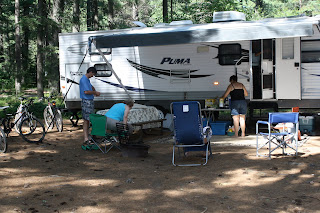 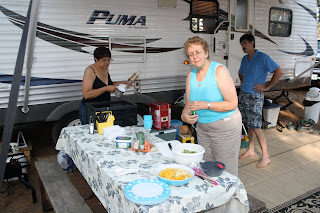 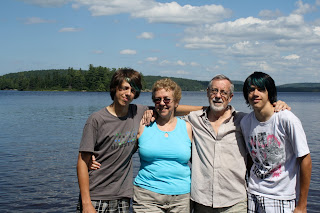 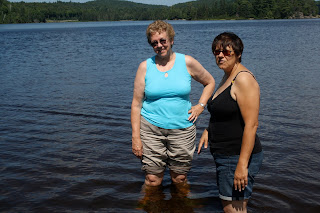 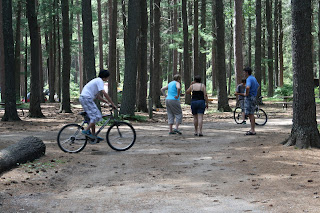 Walking through the campground - a pine forest. 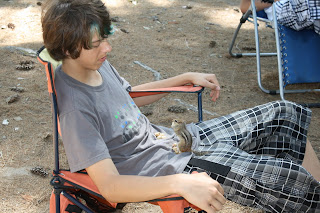 Gus entertaining a chipmunk on his lap. 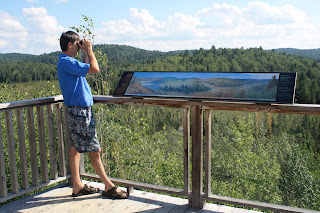 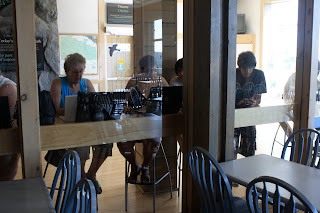 Trying to get online with the very slow wifi internet at the Visitor's Centre
Posted by GoneRving at 3:38 PM No comments:

Our friends, the Krugers, have invited us to spend a night or two up in Algonquin Provincial Park.  So we have pushed up the visit to Suzanne and the grandchildren to tomorrow and will leave here early on Wednesday morning, stopping only to buy some food in Huntsville. They are camped in Lake of Two Rivers. We have to come home on Thursday evening because we both have doctor's appointments  on Friday.

The heat over the last 2 days has been oppressive, and I believe it is going to last another few days.

We are never satisfied are we? It's always either too hot or too cold.
Posted by GoneRving at 5:12 PM 1 comment:

Then there are places like Coast to Coast and Resorts of Distinction which have a large membership fee, but then you don't pay to camp.

So many choices. More investigation is needed.
Posted by GoneRving at 6:03 PM No comments:

This week we are having a heatwave here in Southern Ontario. The temps are up in the 30s with the humidex in the 40s. We may be forced to run the AC on a couple of nights.

Today we went down to Charlinda Belgian Chocolates for a very overpriced and underwhelming milk shake. Won't go there again. I think George's Kawartha ice creams across the road are just fine and they are cheaper!

We tried to get the satellite again as the sky was absolutely cloudless and our neighbour, Bruce has gone for a couple of weeks. We eventually got an 80% signal to the right of Bruce's site. The cable is strung up between 2 trees. We will have to secure the wire better as it is sagging. It looks as if someone else has done the same thing as there are 2 big hooks in the trees!

I went to TigerDirect to try and get an internet stick router so that I can run the printer wirelessly. I found one and spent the afternoon trying to set it up and now I find out that it is not compatible with my stick. AAAGGHH so frustrating. Now I have to get the router back.

Oh the trials of retired life!!

Most of the campers have gone for the week, so it is lovely and quiet here this evening.
Posted by GoneRving at 4:56 PM No comments:

The best signal we could get, even from higher up the tree was 50%. So the satellite equipment has gone back into storage and we are on Antenna. It's not bad as we do get some HD channels and some analogue. Only local TV or course, but we are watching the soccer in HD on CBC. Well done, Germany!

We did some polling of other campers and it seems that even if you have a clear view of the sky, Bell does not have a good signal in this area. Strange, but true!

The weather here is wonderful. Hot and sunny. I think we will be glad to be under the trees as we are conserving electricity. I took a reading of the electric meter when we arrived and will read it again when we leave so that we can leave some money for our consumption.
Posted by GoneRving at 9:28 AM 3 comments:

Houston, we have satellite....sort of 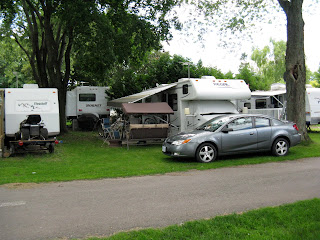 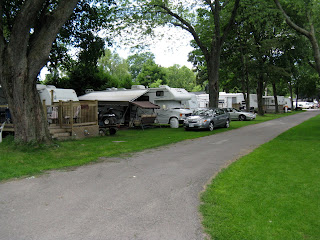 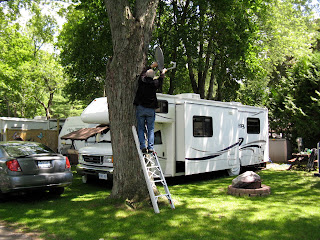 Michael climbed a tree and put the dish on the trunk. We are only getting some of the channels, but at least we are getting a signal. Right now he wishes that he could chop down the cedar hedge at the back that is messing with the signal.
Posted by GoneRving at 10:43 AM 2 comments: