Our previous RV was named Kyalami (Zulu for "Our Home").

Our previous RV was wonderful. I loved that bus. Once we had bought the park model it seemed a bit extravagant to have such a large vehicle so the decision was made to sell it and purchase something smaller for our winters away.

Here is the post I made when we first bought the Dutch Star in 2013.

While we were in the US, I became ill with an electrolyte imbalance, which played havoc with my balance and my ambulation. It was then that I realized that we could not live in the Seneca for much longer (Apart from the fact that the Seneca was starting fall apart - piece of junk). I was so weak and I could not get out of bed. My side of the bed was at the back of the RV and to get out of bed, I had to roll over and dangle my legs over the side of the bed, then slide off the bed and stagger along a very narrow gap to the end of the bed and then stagger to the bathroom. I realized that I needed to be able to get out of bed a whole lot easier. I began a search on the internet for another RV. I found one at The Hitch House in Ontario 38 feet (we did not want to go longer) with the perfect orientation of the bed in relation to the bathroom. 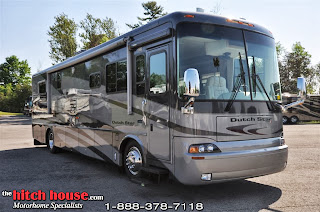 The RV is a Newmar DutchStar 3810 and is a make of RV we have been admiring all winter and wished we had one. The build is very high quality. Several of our friends have Newmars and they are all very happy with theirs. I also wanted a washer/dryer combo. We found and bought a good used Splendide washer/dryer ($350 as opposed to $1200 new!) which we have had installed. I love it!

Automatic Winegard "Road Trip" dome satellite dish on the roof. Just turn it on and it finds the satellites. No hassle. We use Bell in Canada and Dish in the US.

Here are more pictures of the inside of the rig.


On the left of the driver's seat is the levelling system. A press of a button and it levels itself. To the right there is a button with a red light on it. That is connected to a small solar panel on the roof for charging the coach batteries while we are parked for extended periods. 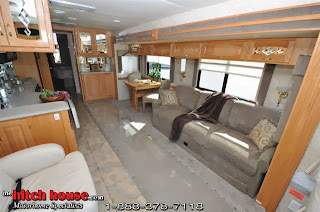 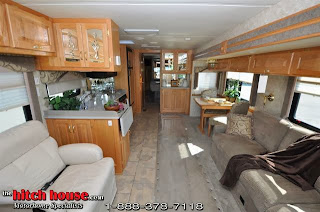