Our next stop is Lake Medina Thousand Trails park. We are booked in here for 2 weeks, but may cut it short. On the way to the park our GPS made a big mistake and took us down a small road that got narrower and narrower. Then we got to a locked gate and had to turn around. Not easy with a 39 foot bus! Michael had to unhook the car and then drive off the road and try and turn around. Along the road there were trees on either side and the RV got quite badly scratched. Hopefully the scratches will buff out.

We eventually got onto the right road and arrived at the campground safe and sound. Found a site and settled in. It is going to be fun exploring this area. Stay tuned.....

Posted with Blogsy
Posted by GoneRving at 7:49 PM 1 comment:

We travelled in wonderful sunshine and dry conditions to the Colorado River Thousand Trails Resort at Columbus, west of Houston. On the way through Katy we stopped off at the biggest Camping World we have ever seen. Of course we forgot that we went there for a new water filter and came out with a knife safe. A good excuse to go to another Camping World. There is not much more stuff that we need, just a few odds and ends. Living in the motorhome, means that we have a limited amount of space for stuff.

The campground is very easy to get to and we booked in and found a wonderful site right down by the river. It is so beautiful here. The trees, pecans and live oaks are still in leaf (mostly) and the grass is green and well kept. What a lovely clean park. There are deer wandering around and the birds are wonderful. The river is still quite full after all the recent rain in this area. It is very silty and brown looking, but is flowing well.

The day after we arrived we found out that they were having a Potluck on Thanksgiving Day, so we signed up. I baked a mincemeat pie (the fruit kind) and took that along. We had turkey and ham and all the trimmings. My pie disappeared so fast. We sat with a Texan couple and it was really interesting to hear their opinions on the government, Obama and Obama-care. I won't elaborate. I do not take political sides, especially in the US.

We mostly just relaxed for the 3 days were there, did some laundry....I love my washing machine, rode our bikes and took some walks in the wonderful weather.

Posted with Blogsy
Posted by GoneRving at 7:36 PM 1 comment:

Michael had washed the car and the motorhome when we got to Paragon Resort, so he was very reluctant to travel in the rain and mess it all up, he was very happy to wake up to sunshine on Sunday morning. Our next stop was the Thousand Trails campground at Lake Conroe, just north of Houston.
Our trip was along all backroads, but was most enjoyable except for one slightly disconcerting moment when we had to pass under a bridge with a height of only 12 feet 3 inches. Our motorhome is 12 feet 2 inches, so we took it very slowly, but got under it without mishap...whew!! 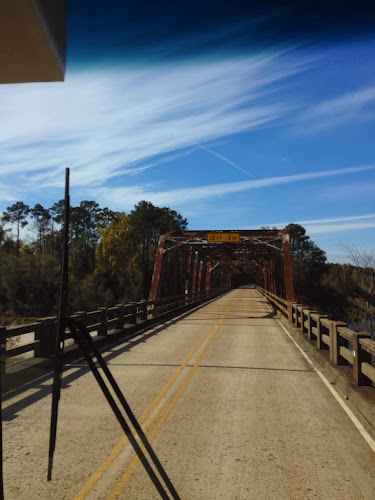 We made good time and checked in just after lunch. There was not a huge selection of sites but we did eventually find a pull through. The pull throughs are just awful. Obviously laid out many years ago before the large RVs of today. The sites back onto each other, with one RV facing one way and the other facing the other way. The problem is that each of the sites are so narrow that it would be almost impossible for two RVs with slide outs to park next to each other. However, we did get into the site, with the passenger side of the RV right off the edge of the parking spot.
Well, don'tcha know, the heavens opened and it rained for the next 2 days. Our site became a swamp. So much so that we could not even get out the door without stepping into water and mud up to our ankles. Michael, very ingeniously, pulled the picnic table over to the door so that we could step out onto that and then walk down the table and thereby avoid the water. It was most inconvenient, but it worked.
While we were there we took a drive to see if we could find our Coast to Coast home park, Timberlodge RV Park. After a bit of a runaround we did find it. A tiny little run down park along Texas Highway 150, near a small community called Punkin. I don't think we will ever stay there. Only a few sites, no concrete pads. a tiny 'lodge'. I will let the pictures speak for themselves. 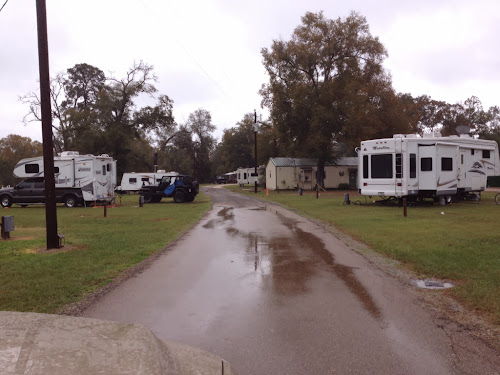 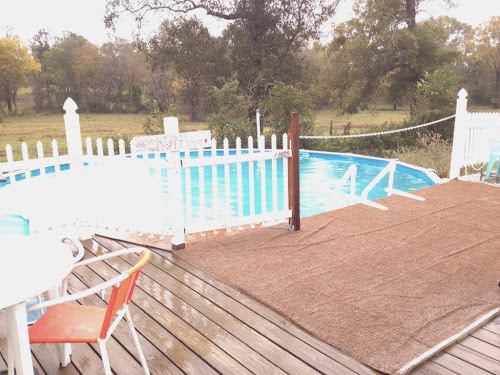 On the way home from Timberlodge we went through a few flakes of snow and the temperature was hovering around 0C. Brrr! A quick stop at Walmart for a few supplies and home we went to our nice warm motorhome. We love the heat pump!

Posted with Blogsy
Posted by GoneRving at 6:21 PM 3 comments:

The Natchez Trace passes through 3 states, Tennessee, Alabama and Mississippi. At the bottom end is Natchez and across the river we passed into Louisiana. Back into the traffic and big transport trucks. A couple of people on the Trace had told us about Paragon Casino Resort in Marksville, LA. It is a large casino on a reservation and they honour Passport America for 5 days. So we plotted our route and headed there. At $8.00 a night plus taxes it was not to be missed. The coming weekend is also the annual BBQ and we were told that it is not to be missed. 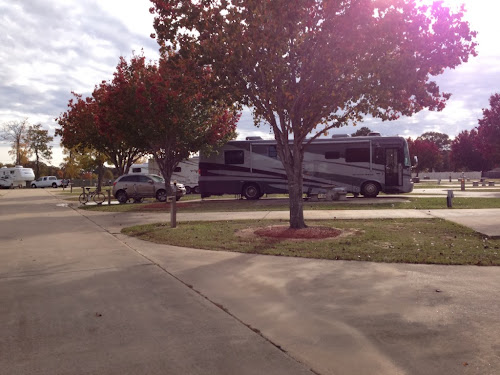 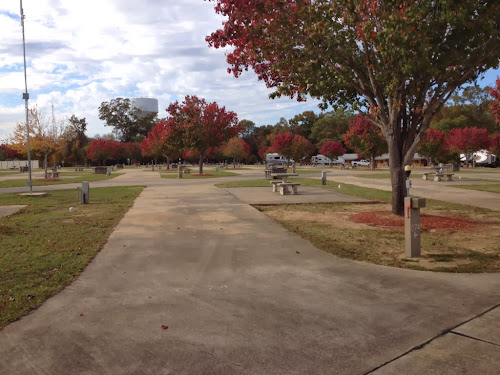 The RV Park is laid out very neatly with level concrete pads on every site and full hookup, including 50 amp electricity. We could only get a booking for 4 nights, bjut thought we would try for a 5th night when we got there. As the weather was deteriorating and rain was predicted for the weekend, we were able to get a 5th night at PA rates. Hooray! 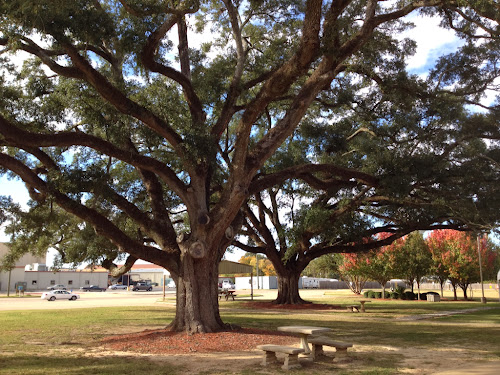 The first couple of days we were there were quite pleasntly warm and then the cold front moved in and we had rain. The BBQ on the weekend was quite a big affair, but we misunderstood the procedure and what we should have done, was to sign up as judges for the food. We would then have got free food. Only one group was selling their stuff and it was a piece of pork and a whole bunch of carbohydrates like potato, rice and bread. as I do not eat carbs, we passed on the pork and went and ate in the casino. 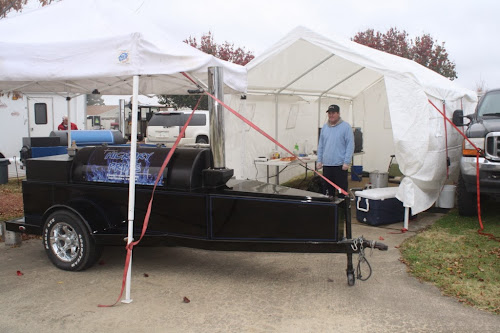 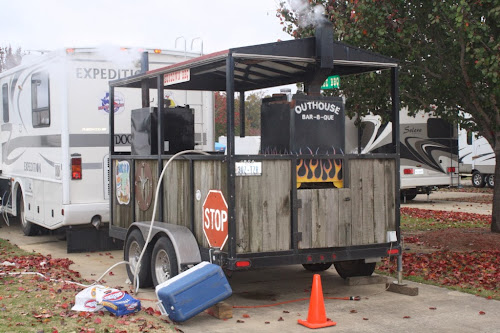 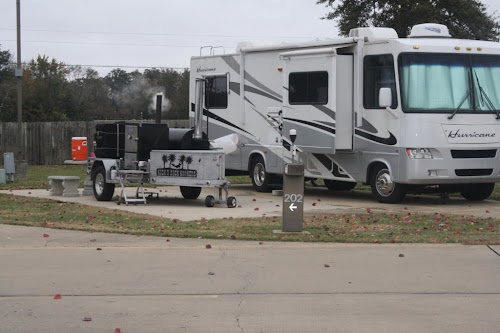 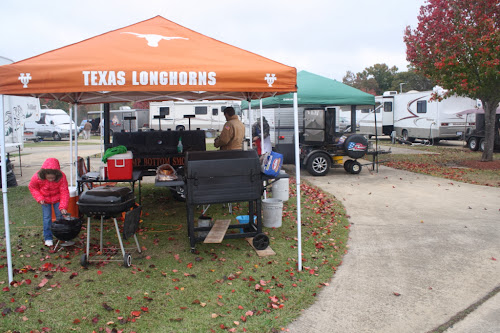 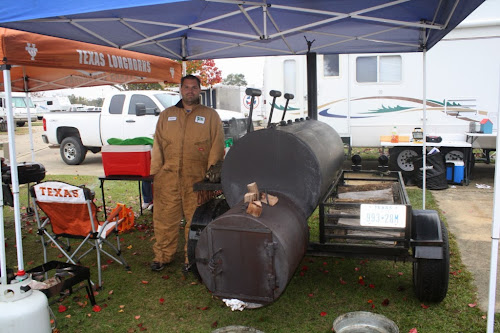 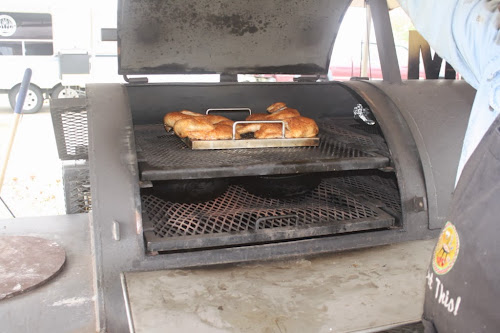 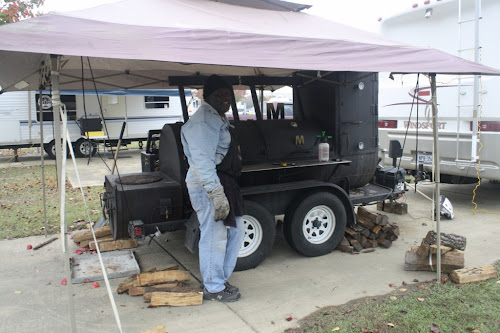 I have included photos of some of the smokers and barbeques. Boy, they are BIG! These people taake their BBQ competition very seriously. 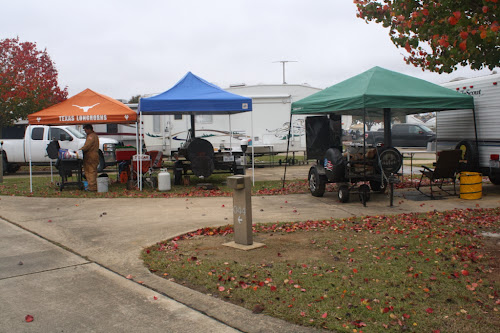 At the same time as the BBQ there was also a vintage car show, which was washed out. Some people did not even take their cars out of their trailers, the weather was so bad. 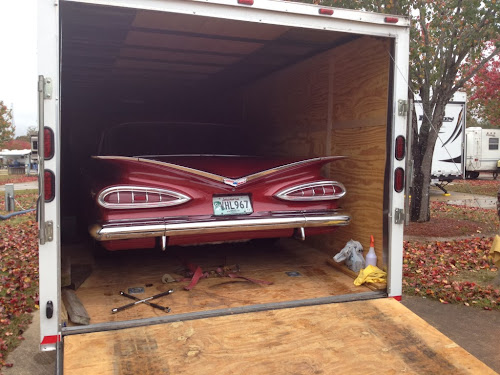 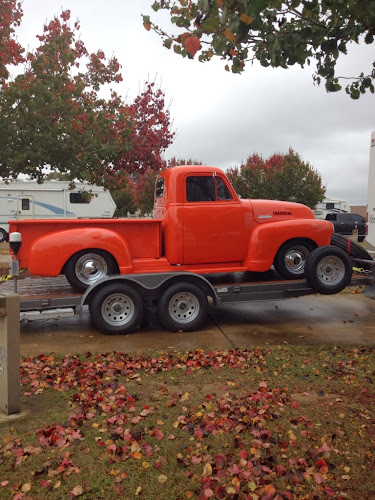 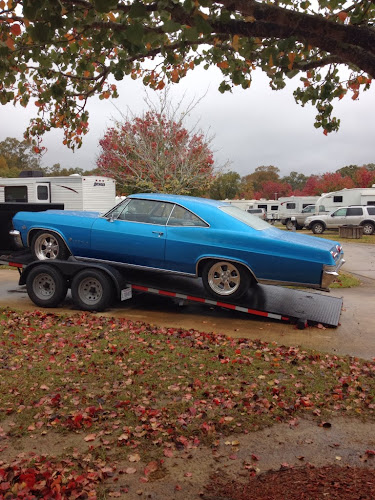 Will we come back if we are passing this way again? You betcha!! Wonderful park.

We decided to stay an extra day because the weather had deteriorated so much. Winter storm Boreas was moving in and we were not sure to expect, so we battened down the hatches and played the wait and see game.

Posted with Blogsy
Posted by GoneRving at 8:56 PM 4 comments:

Today we started to come out of the gloomy weather and saw some sunshine. How pretty the road is with the sun shining through the trees. We went through an area where a tornado ripped through. I did take photos, but they were lost along with others of the trace. If I find them, I will post them.

Our drive to Rocky Springs campground was as uneventful as the past 2 days. Lovely quiet, peaceful traffic free drive. I love this road!! Next time we will take it slower and investigate the history a bit more..

Rocky Springs is one of the free campgrounds on the way. It is a real treat to stay overnight. No TV, no internet, no noise. Just peace and quiet.

Below are photos of one of the historic sites along the way. It is all so well done. Next trip we will take it slower and enjoy the history and scenery. 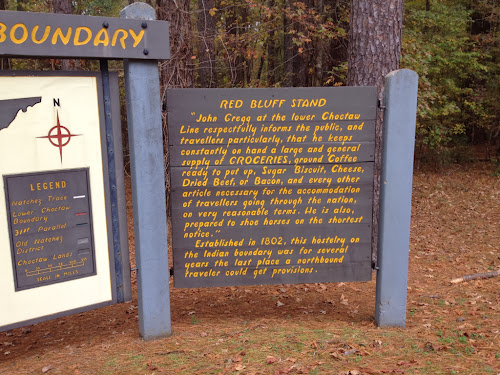 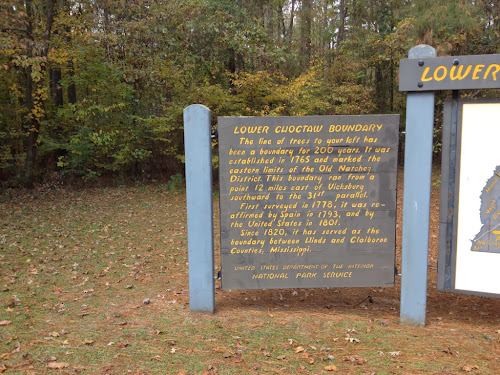 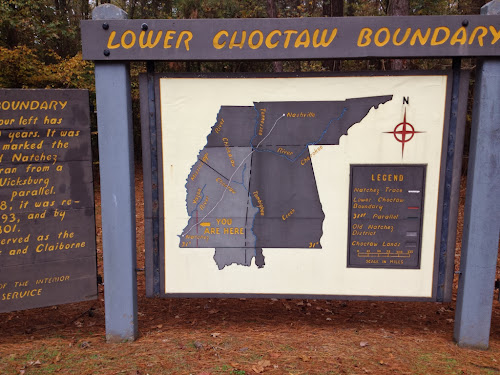 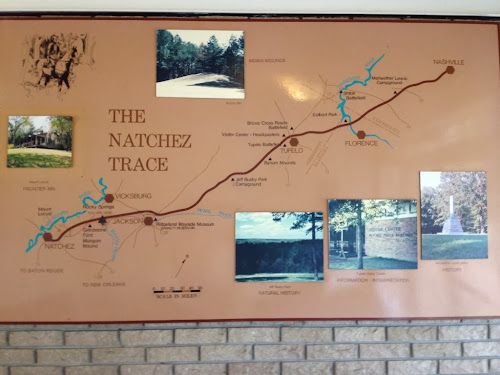 Posted with Blogsy
Posted by GoneRving at 7:28 PM No comments: